KoKeBee is an organization run by three Japanese women who now call Sydney, Australia home. Even though we live far away from Japan, we apply Japanese customs and culture to our daily life. Through our everyday life abroad, we realized that Japan has so many wonderful cultures and aesthetics.

One of them is the Japanese spirit called “mottainai” that has been rooted in Japan for a long time. The word “mottainai” means “Too good to be wasted” which conveys a sense of regret over waste.  The word originates from Buddhism.

The word, “mottainai” is consisted of two Japanese words.

Together, it means, “use object until its shape disappears completely”

For example, in the old days, yukata(Japanese casual kimono) or Kimono(Japanese traditional clothes) were used as sleepwear when they became old, and then they were sewn again into diapers and rags, which were used repeatedly until they reached the end of their life then finally burnt. Furthermore, the remaining ash have been used as detergent and fertilizer.

And when roasted sesame was crushed in a mortar to make a dressing, the residue of sesame left in a ditch of mortar was melted by adding the stock of miso soup and returned to the pot. The mortar will then be clean and you will need almost no water to wash it.

In old days, this residue was melted and cleaned by pouring the stock of miso soup, then put back into the pot.

As a result, the mortar get clean and almost no water required to wash it.

Other famous ones are the “Kintsugi” which means “golden joinery” which is a repairing technique used when crockery and lacquered tableware were chipped. This is the Japanese art of repairing by applying lacquer dusted or mixed with powdered gold, silver and platinum along the line of the cracked dish wears.

There is also “Haire” which means exchanging the strings or the bottom part of a pair of wooden clogs (traditional Japanese footwear), “Tagaya” which is a repairer who mend the tubs and barrels by applying bamboo or metal strings around, “Recycle paper truck” which collectors who collects unwanted paper materials such as newspapers, books, magazines etc. by driving a truck on a door to door basis. There are endless example of “Mottainai” spirit have been practiced in everyday life in Japan since old days.

From these examples it is obvious that “3R”, Reduce(reduce rubbish), Reuse and Recycle which are three essential factors required to realize Sustainable Lifestyle, was already practiced in Japan during the Edo period.

At KoKeBee, including Beeswax Eco Wrap, we would like to introduce the products that will allow us to practice this “Mottainai” spirit.

For example, the products,

By doing so, we would like to continue to stock products that will allow us

It is from our pure wish to spread this spirit to people all over the world through our products.

Mrs. Wangari Maathai, a Kenyan environmental activist and Nobel Peace Prize winner, who is working to make the word “Mottainai” to a universal word, said, “This word has the meaning of respect and love for the nature and things”

The days using single use (disposable) materials are over.

From now on, each of us need to make an effort to restore our mother earth by what we can do, even little by little. We believe “Mottainai” spirit is the key word needed in the present era.

Our logo character, “Kokebi-chan” is a character that combines “Kokeshi doll”, which symbolizes Japanese traditional culture, with “Bee” which is essential for making beeswax eco-wraps. Kokeshi doll is a world-wide idol who can be recognized as “Japanese Doll!” Even in foreign countries. We hope that our Kokeshi-chan entrusts the spirit of Japan with the wings of bees and spreads its wings to the future and to the world.

Born in Tokyo. She came to Australia in 2011 and gave birth to two children. Since then, four family members have lived in Sydney.

For about 15 years, she has been active as a dancer in various countries including Japan, Australia, and Asian countries. In 2009, she became a NIKE contract athlete dancer, and at the same time expanded her range of activities as a yoga instructor.

>Currently, she is engaged not only in yoga but also in sound therapy using a singing bowl to approach the mind and energy from the perspective of the physical and mental health of the client. With the start of natural care for the skin, such as facial yoga and fasting of the skin without the use of moisturizers on the face, lead her gradually shifted to the minimalist lifestyle.

Her column “Easy! Everyday Exercises” is being serialized in “Nichigo Press” a general magazine for the Japanese community in Australia. In addition, she has launched and manages the “Sydney Japanese Mother’s Party” on Facebook, where it is joined by more than 2000 Japanese mums living in Sydney.

I first came across beeswax eco wrap when I came to think that I wanted to shift my lifestyle to more simple and natural way.

My first impression of beeswax wrap was like “It is so cute and will be popular if I sell it!

But after we founded AIY Australia which runs KoKeBee brand and started running business, we continuously discussed over the topics such as “what is our managing philosophy” “what is our mission” and I started having this strong feeling that “I want to aim at creating a recycling-based society in which humans and nature can coexist”

Now I feel that humankind is standing on the brink. I believe each of us need to do something they can in order to protect the earth. And I believe it is not that difficult or painful things to do.

If we can spread this happy feeling of living along with the nature to the world through KoKeBee … I have entrusted such a big dream to KoKeBee , our mascot character.

Born in Yokosuka City, Kanagawa Prefecture. After being involved in setting up an e-commerce site for women , she moved on to work with a publishing company and was responsible for editing magazine. After moving to Australia, she was in charge of editorial work at a local Japanese newspaper, and became the deputy editor. After returning to school and obtaining an MBA , while working as a freelance editor, she was in charge of support operations such as explaining distribution data at an American financial data provider.

From 2010 , when she moved to Australia, she became interested in quantum mechanics, astrophysics, sacred geometry, qigong, etc., and was more immersed in pursuing the truth of the universe.

In 2012, through a vivid transcendental experience at a sacred geometry workshop, while understanding the mysterious functions hidden in the human body, at the same time, visioned the true way of this world where humans and the natural world coexist as one. When she was looking for something that could be more familiar than geometry and contribute to raising the awareness of humankind through a general language, she was resonated with the concept of KoKeBee and the world view that aims to realize a recycling-oriented society, and in 2019, she joined AIY Australia.

I was born and raised in a small town surrounded by beautiful sea and mountains. Nature taught me a lot, and of course I thought that such an amazing environment would last forever. There was a time when I enjoyed youth in big cities such as Tokyo and NY in search of an exciting life, but for me, what I finally want to return to is a rural city where I could live while feeling the flow and energy of the nature rather than a big city filled with concrete.

A deep forest where you can breathe comfortably, beautiful beaches and lakes where the shining water is beautiful like a jewel, and you can be healed just by looking at them, and the starry sky that spreads in the clear night sky, which you will want to talk to forever.

Perhaps everyone has the experience like yelling in their hearts, “I don’t want to go home!”, after experiencing time in such a beautiful environment for a few days.

Environmental destruction now seems to be proceeding at an unprecedented speed. In the present circumstances, I believe that each one’s sentiment and awareness, even it seemingly insignificant, will become a great power when they resonate with each other.

I would be very happy if we could deliver information and products that could help you to reach to such a scene through KoKeBee.

Born in Kobe City, Hyogo Prefecture, she has lived in Sydney, Australia since 1993. A family of four with a Japanese husband, a university student daughter and a son. She is also active as a natural allergy care advisor and organic expert.

She has had allergies since she was a child. Her father, who was a doctor, had a strong influence, she had been applying steroids and antihistamines whenever symptoms occur for about 30 years. In her 40s, when she was still suffering from physical problems, she decided to seriously deal with the severe atopic dermatitis that had already been unable to cure by steroids. By reconsidering her diet and incorporating natural remedies on a daily basis, she restored clean skin and a healthy body.

She had encountered and loved “Beeswas Eco Wrap” while incorporating a natural life, and commercialized it with her current partner Asuka. They launched AIY Australia Pty Ltd in 2016 and started manufacturing and selling beeswax wrap as our own product.

Her dream is to build a small self-built house with her husband and live a semi-sufficient life. She likes biodynamic farming, food science experiments, and manual driving.

As a countermeasure for my allergies, I was enjoying the natural life while cooking rice in a clay pot, making miso with organic ingredients from scratch, and making lotion with herbs in the garden. Beeswax Eco Wrap was originally used as part of my own allergy control measures to reduce the intake of environmental hormones.

But as a result, I realized that such lifestyle did not only improved my allergies, but had many other effects on the world. It also reduces the amount of rubbish generated from homes, supports organic farmers, protects them from the health hazards that result from exposure to pesticides, and reduces child labour on the other side of the globe. It was all connected! –I started realizing that fact.

Now, I want to protect the health of not only myself but also many other people who are suffering from allergies. And I also want to tell you that it is the way the earth circulates in accordance with the laws of nature.

Through this small, square beeswax eco-wrap, I am renewing my vow to work in every way I can to reach the people of Japan and all over the world.

END_OF_DOCUMENT_TOKEN_TO_BE_REPLACED 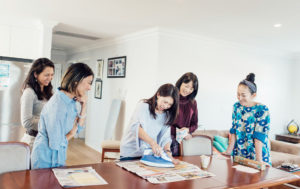